This weekend I hit the ground, figuratively and literally as I got back onto the bike again at Die Burger Mountain Bike Challenge and into the 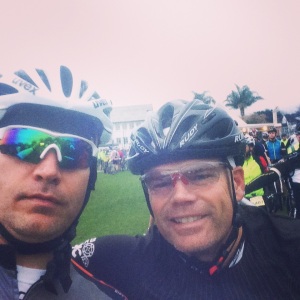 swing of things for the next mountain biking season. Now I knew I would not be as fit as when I did the Absa Cape Epic in March, but OH MY WORD! Records would show that I did better at the event than in 2013 with PR’s on Strava over the first section, but my body and lungs were not loving me as I pushed hard to climb the 400m over the first 10km and put myself into the red zone to feel like I never recovered after that for the next 400 odd meters of climbing over the next 10kms. Now, not only did gravity suck, the little drizzle as we started just helped the mud to suck down on my wheels even more and more forcing that extra power through the legs and one feeling that you are not going anywhere. 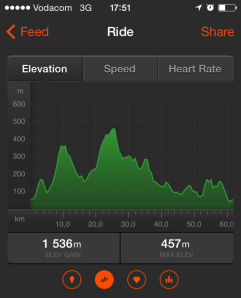 How to tap all the energy form a 111kg Mountain Biker, climb, climb and climb in the mud in the first

But enough complaining it was great to be out on the bike and in the mountains again after weeks of being forced indoors through rain, cold and darkness (and yes laziness and a war duvet with snuggling pillow).  The first time back on the bike off road was always going to be a challenge and the mud didn’t make it any easier and as a result I decided to buy some ground after asking a guy that fell in front of me if he was ok, only to have my front wheel slide out and fall right next to him – we were both ok! No tremor were felt in Stellenbosch as the ground was so slippery one just skidded ahead until the mud build-up was finally enough to stop your momentum – Fun in the mud. My back did not enjoy the mud struggle as it personally told me so the next day when I woke up, eventually.

Now kud0s to my mate Thinus Crafford, who looks in pristine cycling shape and destroyed me on the course, for sticking it out with me as we start our racing (well more like riding) season celebrating a year on since we first rode a mountain bike event together at Die Burger Mountain Bike Challenge (For my English and foreign friends, Die does not mean die (like in dead) but is the Afrikaans word for ‘the’). Looking forward to some great races ahead as our next challenge will be the Ride2Nowhere in McGregor  were our challenge in the Giro D’Amici (Tour of Friendship) starts as we face of in a series of events against Rob and Andrew – so the pressure is on to get in to shape in the next few weeks.

Here is to sunny weather and motivated training. (Coach, I miss you – help!)

This site uses Akismet to reduce spam. Learn how your comment data is processed.

I hope that someone sees this page and decides not to give up...

Because your Soigneur knows best...

Thoughts from a life lived in the sky, ocean and mountains

“The very basic core of man’s living spirit is his passion for adventure. The joy of life comes from our encounters with new experiences, hence there is no greater joy than to have an endlessly changing horizon, for each day to have a new and different sun”.

A Dutchie getting fit!

My observations and occasional rants on life, love and anything else that makes our world EPIC.

Ramblings of a Geek. Mandy is a tech blogger, mother, and loves all things that light up and go "beep". She brings computers back to life.